Piezo Jet Valve Dispensing: Tiny, Precise Dots of Material Shot at up to 1500 Times Per Second

If your operation needs the ultimate in speed and precision, the cutting-edge of dispensing technology may be right for you.
By Can La, Product Manager, Techcon

Selecting the automated dispensing technology that is the best fit for the specific application from the half dozen or so familiar technologies available—such as the auger valve, progressive cavity pump, time pressure valve or pneumatic jet valve—is not a consideration to be made lightly. For most operations, the consequent match is adequate, and attributes such as throughput and quality are well suited to the application on an ongoing basis. For others, however, such as medium- to high-volume mobile device, LED, consumer electronic and medical device assemblers, there is a constant drive for the ever higher yields that can drive improved profitability and for an advanced dispensing technology that can better help them achieve it.

For these users, there is a relatively new technology that can increase dispensing rates for adhesives and other fluids by some 20X or more—at rates, for comparison purposes, as fast as 1500 Hz continuously with up to 2000 Hz maximum burst. This is the Piezo Actuated Jet Dispensing Valve, and it dispenses at approximately twice the speed of the pneumatic jet valve.

Operators often are amazed at the impressive placement precision and small, neat dot sizes generated by a piezo jet valve, especially considering that a) it is moving so fast, and b), the material is being shot and not being physically placed, as would be the case with most dispensing solutions that rely on actual contact with the substrate. Using sophisticated controllers, shot sizes can be achieved as small as 0.5 nanoliter, with outstanding consistency and repeatability. This precision also makes the piezo jet suitable for some other niche applications where speed is less of a factor, but where operators have a challenging time achieving the desired dispensing of ultra-small dots or ultra-thin lines consistently over time.

Jet valves — both the older pneumatic jet technology and the newer piezo jet technology — gain a significant speed advantage primarily by eliminating the Z-axis of movement. While the height sensing and repositioning and the up/down motion that is necessary for contact-based valves such as progressive pump and auger valve technologies — with the needle moving down to touch the substrate to dispense the fluid and then pull back up — are considered reasonably fast by most criteria, these account for a high percentage of the required dispensing time. Contactless jet dispensing, by contrast, shoots the material accurately from a fixed location above the substrate, shot after shot. This enables the pneumatic jet valve to reclaim this excess motion time and dispense at speeds some 10X faster than contact-based valves.

However, while the pneumatic jet valve technology leaves the speed enhancement at “only” 1000%, the piezo jet valve ups the ante considerably. In these devices, rather than relying upon air pressure, a piezoelectric actuator converts an electrical signal into a highly precise motion that dispenses the material in the desired pattern far faster than a mechanical pneumatic-based solution, which must open and close and reset, a process that expends about 20 extra milliseconds each time. In this way, speeds up to 2000% faster than contact-based solutions — 2X faster than pneumatic jet solutions — can be achieved. For speed-sensitive, high-volume, high-throughput applications, the increase in yield can be extraordinary and highly profitable.

Additionally, the ability of the piezo technology to deliver the smallest dots or lines — with micro shots as small as 0.5 nanoliters — is hard to beat as is the accuracy and repeatability of each and every dispense.

Another significant advantage of the piezo jet technology is its ability to deliver up to 1500 Hz speed even to those operations involved with the production of substrates with irregular heights or those where harder-to-access “nooks and crannies” must be reached. Since the fluid is shot rather than dropped, nozzles can be more readily angled to reach the exact point where material is required. Further, since the nozzle doesn’t need to drop down on the item, products with irregular protrusions such as a motherboard with high spots will not be damaged as they might be when using a contact-based valve that must come down close to the substrate, eliminating a common source of damage, waste and downtime.

In a piezo jet valve cycle, the fluid starts inside the valve, held between the tappet (piston) and the nozzle. The electronic piezo crystal oscillates up and down at a high rate of speed, generating kinetic energy that forces the fluid to shoot out under carefully controlled pressure to form a perfect bead of material at the target location. 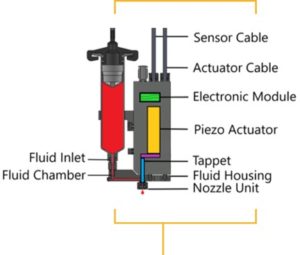 • Rising time: Total time for the tappet to move to open position

• Falling time: Total time for the tappet to move to closed position

• Needle lift: The stroke length, based on the viscosity of the material

• Delay time: Time the valve stays closed, waiting for the next cycle 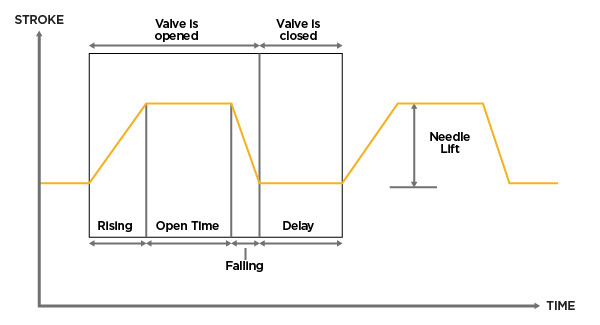 All of these steps can occur, repeated over and over again, up to 1500 times per second continuously, with that number an objective basis for comparison with other dispensing methods being considered. Under real world conditions, the number of drops dispensed per second will be impacted by factors such as desired shot size, the viscosity of the material, and the speed of the horizontal movement of the substrates being assembled. In use, as noted, contactless piezo jet valves typically can dispense about 20X faster than any contact valve.

Ease of Use, Size of Footprint and Other Purchasing Considerations

When considering upgrading to the power of a piezo jet valve dispensing system, a vital point to be aware of is that the phrase “jet valve” can refer to both the older pneumatic jet valve as well as the newer piezo crystal-driven jet valve technology. While both technologies are significantly faster than familiar contact dispensing options such as the auger valve or progressive cavity pump, the newer piezo version of the jet valve ups the ante considerably, and as noted can deliver some 2X the speed of the incumbent pneumatic version. Nevertheless, since “jet valve” referred only to “pneumatic jet valve” for so many years, many people still use the terms interchangeably, and many potential users and even valve manufacturers are relatively unfamiliar with the piezo jet valve or have not yet had the impressive experience of seeing it in action. In other words, it behooves the buyer to specifically refer to “piezo” in all discussions to ensure that everyone is on the same page.

Currently, several manufacturers provide piezo jet valve dispensing solutions, and, as one would expect, a number of aspects of their design as related to both the valve itself and the related controller can differ significantly.

For example, a key issue to consider is the relative ease of identifying the right “recipe,” the combination of parameters to ensure correct placement and the correct amount of material. Piezo valves gain much of their small dot consistency through not only making use of tiny aperture nozzles but also by providing the flexibility to fine-tune both material pressure and jetting pressure. Once the correct parameters are determined, the valve is extremely accurate and consistent in maintaining them, but getting to that point often takes trial and error. Key in reducing the challenge are the capabilities of the controller provided, as well as any assistance that might be available from the manufacturer. As to the latter, some manufacturers might just look at an MSDS and render an opinion. Others will offer some level of hands-on testing of your material in their labs to ensure efficacy. Further, they might be willing to use the knowledge gained to help you more quickly fine-tune the parameters back in your operation. It pays to inquire before the sale.

Additionally, the user interface of the controller can make a huge difference in the relative ease in determining the proper parameters and, therefore, the level of potential wasted product or loss of productive uptime during initial product set up. Some piezo jet dispensing systems require manual tweaking with varying levels of precision; others provide the ability to fine-tune using software that allows the operator to modify the jetting properties for different fluid types and optimize the process for repeatable dispensing; and some include even more full-featured controllers with touch screens and graphic interfaces that optimize usability and make set up faster and more intuitive than in the past. Some manufacturers are raising the bar even further by providing the ability to set parameters as well as monitor and troubleshoot remotely, allowing operators to control their systems from anywhere at any time, even from across the ocean, using an app on their devices. These piezo jet valve models fit into the operation of a sophisticated Industry 4.0-based smart factory — or one that is working towards becoming one.

The amount of space that the piezo jet units require also may be of importance to both benchtop users and machine integrators. For the former, sleeker units mean smaller work area demands and more efficient delineation of factory space. For the latter, with the speed and precision benefits of the piezo jet valve, machine builders are more frequently looking to build one or several units into high end automation application equipment, combining them in the cabinet with robots and other complementary devices to deliver best-in-class capabilities to their customers. Towards this end, it may be worth noting the relative size, weight and footprint of the individual brand piezo jetting dispensing valves being considered.

A more esoteric issue is that of all the dispensing valve technologies available on the market, the piezo jet is not only the most advanced but also the most challenging to manufacture. The tolerances on components such as the nozzle and tappet are extremely tight and crafting them accurately is beyond the capabilities of many parts fabricators. Piezo jet models that cut costs using less complying components likely would quickly demonstrate issues such as fluids dispensed out of place, inconsistent speeds, cleaning challenges, frequent failures and other problems that negatively impact productivity and quality. As you weigh the benefits of different models, consider speaking to other users about their experiences.

Is a Piezo Jet Valve Right for You?

In addition, there are some limitations to consider. For example, potential users should take into account the type of materials they wish to dispense. Piezo jet valves can be used with materials demonstrating a very wide range of viscosities — up to two million centipoise or more and including materials as thick as silicone and urethane rubber. However, due to the need to evenly shoot the material, those that have solid particles blended into them, such as solder paste with its ultrafine metal particles, typically are not the best candidates for jet valve dispensing technology.

Finally, and there’s no way around it, obtaining the superior cutting-edge technology of a piezo jet valve represents a larger upfront investment than that of contact dispensing systems. However, it can be surprisingly comparable in cost to the older pneumatic jet valve considering how much faster it is. Further, helping significantly defray the lifecycle cost is the fact that the most expensive part of the system, the piezo assembly, is highly robust and rated at around one billion cycles. Nevertheless, if your process will not benefit from the highest speed dispensing available anywhere as well as super-high precision, the investment might not be worth it. However, if a quantum leap in throughput with super accuracy would be valuable, significantly boosting profitability, then a piezo jet valve might be a highly desirable investment.